Forty years ago, scientists revealed a fossil of the largest spider that had ever lived. While never reaching the fame of a T-Rex, the foot-long arachnid became a mainstay of natural history museums around the world, unparalleled in its ability to creep out and disturb children and parents alike.

Until the moment it wasn’t.

Decades later, we were told that everything we thought we knew about this animal was incorrect. For twenty-five years, the museums, the documentaries, and the general paleontological community all got it wrong. How did they mistake the creature the first time, and why didn’t anyone notice until 2005?

It all begins in 1980. An Argentinian paleontologist named Mario Hünicken quietly announced an extraordinary discovery. He had found a fossil in the sediment near Baja de Feliz which dated back to the late Carboniferous, 300 million years ago. It was a foot long, and appeared to show most of the animal’s body and three of its legs. 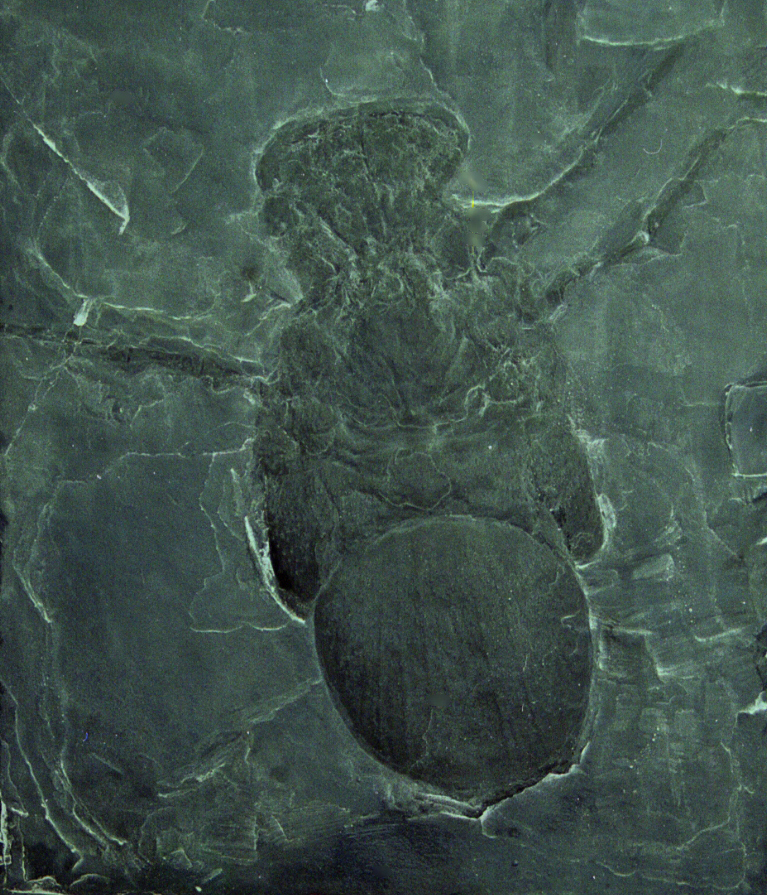 He named it “Megarachne”, or “Giant Spider”. It did the term justice. Based on this fossil, Megarachne was an ancient ancestor of modern-day tarantulas. With a length of 13 inches and a legspan of over 20, this specimen dwarfed even the largest spiders today, the Giant Huntsman and the Goliath Bird-Eater.

Using a technique called X-ray microtomography, essentially using X-rays to build a 3-D model of the fossil and reveal otherwise invisible details, Hünicken began to learn more about Megarachne’s biology. There were two visible eye sockets, but also a central protrusion that could be space for more. It had an extensive set of chelicerae (essentially, spider’s jaws) at the front, which we see as a bulbous protrusion. They were uncommonly wide and developed for a spider, and may have been large enough to have substantial pushing power on their own, giving the spider more ability to maneuver even large prey to its mouth.

While unimaginable today, a tarantula of this size would not have been that out-of-place in the Carboniferous Earth. The atmosphere was far more oxygen-rich, which meant that arthropods and insects could grow far larger than they can today. This was an era with dragonflies the size of pigeons and seven-foot millipedes. Megarachne would not have wanted for prey.

It’s unlikely this creature spun webs like the Golden Orb-Weaver. Instead, it would have built funnel-like nests from its webbing and waited for a passing lizard or amphibian or large insect to pass by. Lunging out, it would have used those scoop-like chelicerae to grab the animal, then inject it with paralyzing venom. Or, perhaps even more horrifying, it might have wandered the floors of the lush rainforests which covered the world at the time, stalking its prey like a tiger. If it did, it would have to be careful: even this far into antiquity, the largest predators of the time could be as large as your average bear.

Unfortunately, it was hard to tell too much of this for sure. Megarachne was only known from this one fossil, and while several casts had been made for further study, the original, complete with the hidden details Hünicken uncovered, was essentially lost: sold to an anonymous collector and locked in a vault somewhere. It wouldn’t resurface for another 25 years.

As a result, a great deal of what we knew about this animal was conjecture, based on tiny details only Hünicken and a few others had seen. He wasn’t lying, to be clear: casts of fossils can only show the imprint of the object, which obscures subtle details within the structure.

Hünicken’s microtomography had revealed what appeared to be signature spider traits within the partial fossil. Cheliceral fangs which could potentially deliver venom, even a sternum (the underside of the abdomen, when used in arthropod anatomy). They weren’t as well preserved as the rest, so you had to extrapolate a bit, but it looked like they were there. And besides, the shape of the animal was clearly that of a proto-tarantula.

And yet, there were some doubters. Dedicated arachnologists pointed out a number of inconsistencies between Megarachne and other spiders, most notably the suture between the abdomen (back end) and cephalothorax (front end). Sutures are basically immobile joints, and in humans only exist in our skull. It meant that this spider wouldn’t be able to bend its body the way tarantulas today do, like this: 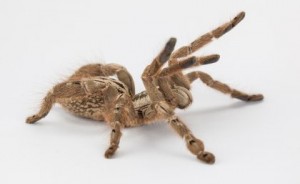 You can even see the suture for yourself in the cast at the top of this post: it’s directly above the curved line around the abdomen. There’s a white spot in the middle. It’s more visible in the original fossil, but you can make it out if you look closely.

Even Hünicken himself acknowledged the discrepancy, along with a few others. But they were easily explained away. 300 million years is a long time, after all.

Meanwhile, Megarachne was busy going as viral as a Carboniferous-era arthropod could go. We’ve always had a weakness for giant spiders, and here was a genuine monster. This thing had more than its fair share of museum displays, an unusual trait for its era. Before the dinosaurs, but after the absolute freak show of the earliest animals, the Carboniferous had one thing going for it in terms of public appeal: the giant dragonfly. In fact, much of the time before the dinosaurs gets skipped over when discussing the extraordinary variety of life on Earth, but I digress. The point is, by the 1990s the museums were in the pocket of Big Megarachne.

Let’s recap. The creature we’re talking about would have looked something like this: 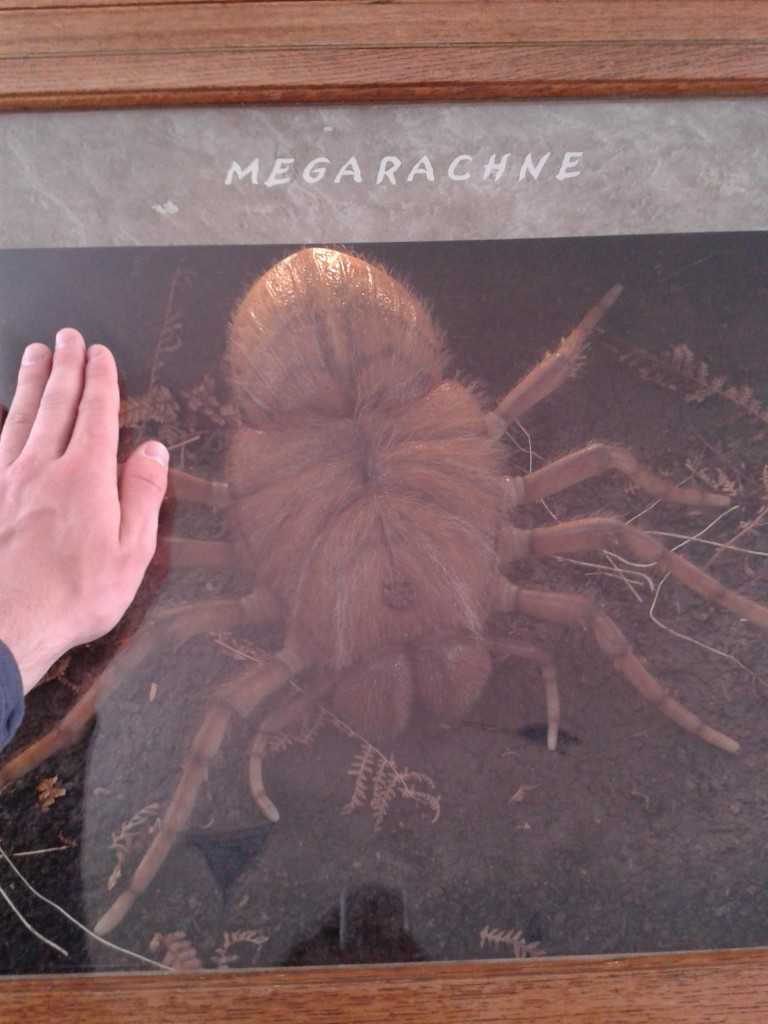 That image is to scale, of course. It doesn’t look like a modern-day tarantula. The body is fused into one big chunk, the suture at work. You can also see the spatulate chelicerae: they’re the two giant growths below its eyes. The smaller limbs between them and the legs are called pedipalps. They’re used to help maneuver prey while eating, and also as tongues and noses. And also penises sometimes. Spiders are weird.

And for about 25 years, that was how it was. Megarachne was a bizarre ancestral spider, made gigantic by an oxygen-rich atmosphere and sporting a set of fangs the size of lightbulbs. A few spider-specialists in the community grumbled that it might have been a Ricinuleid or Solifuge, but for the most part, it was accepted.

And then everything changed.

In 2004, another fossil was found in the same rock formation. It was unquestionably Megarachne: one telltale feature was the identical, and unusual, eye formation. It also looked a lot less like a spider. It’s the middle one in this picture: 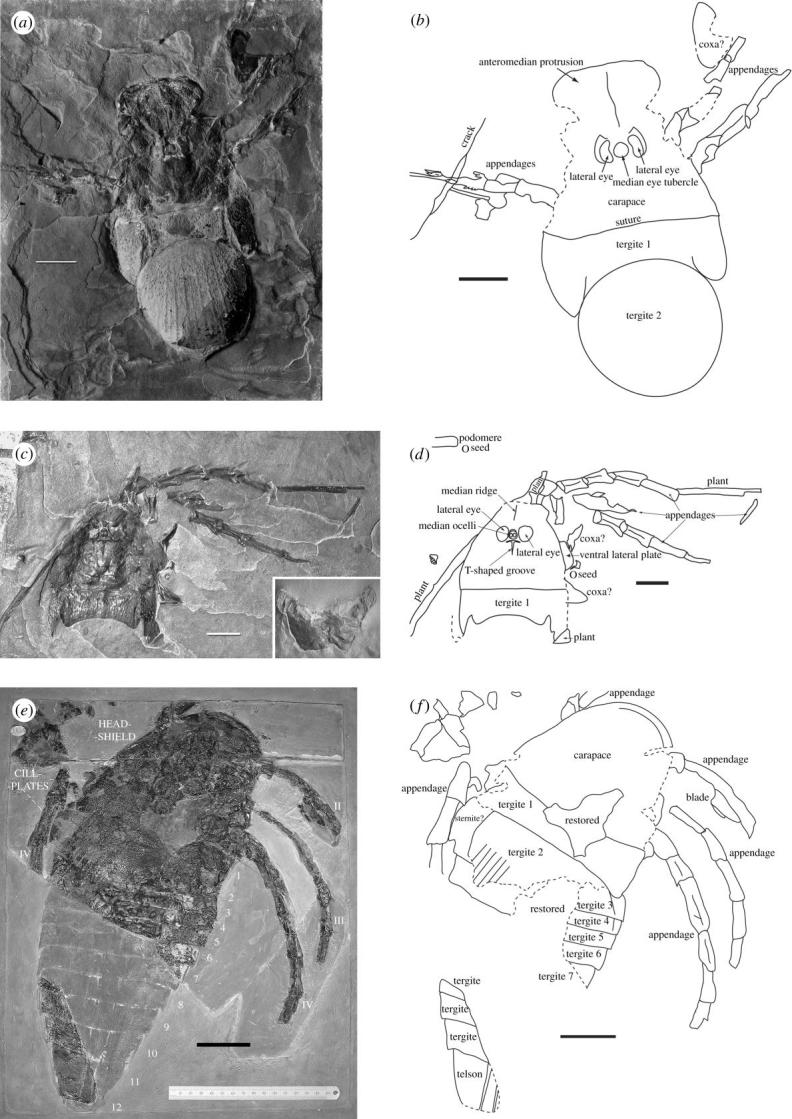 By February of the next year, a new team of Paleontologists, advised by Hünicken himself, published a new paper: Megarachne was not a spider. It was a eurypterid.

The Eurypterids have long since vanished from the Earth, so we don’t have any experience with them like we do for spiders. For that, we should be eternally grateful. Also called “sea scorpions”, Eurypterids dominated the seas from about 450 to 300 million years ago, and lasted for a long time after that. They were filter feeders and apex predators, and ranged from a few inches long to the size of an American Alligator. They would have looked something like this: 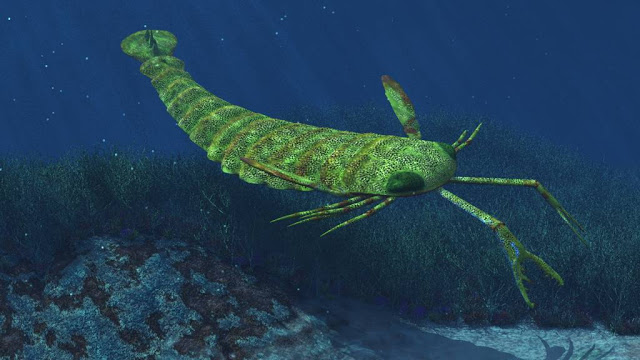 In a single paper, Megarachne lost all its mojo. Not only was it no longer a record-holding behemoth, it was fairly small for its order. It was also not a developed ambush predator: it fed itself by swimming through riverbeds, using its many arms to capture the tiny invertebrates that lived in the mud and silt.

The scientific community didn’t question the results. The evidence was blatantly obvious, and Hünicken himself had co-authored the paper. Indeed, the speed with which the consensus on the animal changed is an example of science’s greatest quality: the ability to recognize when it is wrong and self-correct.

Yet the legacy of their mistake lives on to this day. Species names are hard to change once they’ve been assigned, so Megarachne retained its name. There is now a bottom-feeding eurypterid, not unlike a lobster, whose name directly translates to “giant spider”. But this paper also came at an inopportune moment for a much larger entity: the British Broadcasting Company. Some years before, the BBC had aired the hugely successful “Walking With Dinosaurs”, a high-budget docuseries narrated by Kenneth Branagh that won three Emmys. It in turn spawned a sequel, “Walking with Beasts”, that catalogued the time between the Cretacious extinction and today, and a prequel, “Walking With Monsters”, which would air later that year.

“Walking With Monsters” is a masterpiece of the genre, and I encourage anyone interested to watch it. Like its predecessors, it’s rivaled only by big-budget action movies in the quality of its special effects, but with a degree of accuracy unparalleled by any cinema. The producers consulted 600 paleontologists, paleobotanists, geologists, and even astronomers to ensure that its depiction of a billion-year story was scrupulously accurate to the scientific consensus. They devoted segments to every era of life’s history before the dinosaurs, and with each one showed not only the path of evolution in our earliest ancestors but also the signature creatures of each epoch. And when it came time to pick the signature animal for the Carboniferous, there was only one natural choice: the largest spider that ever lived.

Seldon, Corronca, and Hünicker published their paper several months before “Walking with Beasts” aired, but it was still too late to change it. Megarachne was the star of the entire segment, there was no way to easily cut it out. Nor could it be replaced. They could find a new animal, but that would mean consulting all the experts again, even more money for the special effects budget, a new script for an entirely different animal, hauling Kenneth back into the soundstage, and countless other barriers. It was either cut a hundred million years from the story of life on Earth, or bite the bullet and air the episode.

The BBC opted for the latter. It is, to my knowledge, the only time it has ever knowingly and intentionally aired fake news.

And so, despite being left behind by science, Megarachne lives on, not in the literature or the museum exhibitions, but in the minds of a generation of impressionable science nerds who saw it fight for survival on the television.

I am not ashamed to say that I am one of them.